I Need To Get DDP Yoga Off My Chest! 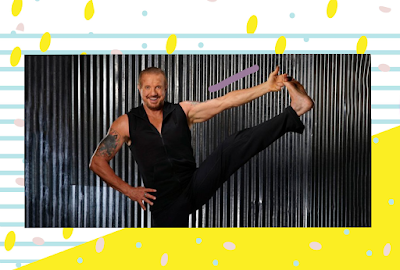 Everyone going, including people with no interest in wrestling have heard its grand!

Despite the fact that I've never really enjoyed yoga, I saw a soundbite of Sasha Banks and Charlotte Flair saying it was really good, which was far more inspiring to me than any of the friends who mentioned it, sorry friends. I tried to find it on YouTube, which is where I find most of my workouts, but alas alack I was found wanting. However, at this point my curiosity had been piqued, my only option was to subscribe.

Now I don't know if I'm fitter than I think, (unlikely because I don’t have the endurance to run to the end of my street) but I found DDPY pretty easy, I actually think Blogilates is harder, but for ages I've been looking for something equally effective for a lazy girl who needs her endorphins boosting, where the trainer wasn't so peppy and accidentally / not so accidentally body shaming me whilst instructing me to squeeze my butt. So, I wasn't entirely won over by the introductory video featuring DDP telling us how much weight each person modelling a move has lost on his programme. Still I thought I'd best give it some time to see how well it worked.

DDP is meant to be great for people with pain and other impairments, in fact it is supposedly responsible for bringing Chris Jericho back from a career ending injury, and yet in my first week i had lower back pain from squeezing my muscles really hard trying to get something out of it. Probably my own fault, but DDP does urge you to really tense your muscles, so probably a bit of your fault too DDP!

Finally, the app recommends you pair a heart monitor to see how effectively you're raising your heartbeat. Now I am a woman who exercises in her underwear by following along free YouTube videos, so you can probably tell how invested I am in spending money on workout gear. But since I didn't think it was working i bought myself a cute cheap pink heart monitor off eBay, of course it wasn't compatible with the app and I am not the one to buy a fit bit or DDP branded heart monitor for actual money. The pink monitor hasn't been a total loss though, I did find out I have a higher BPM at work than I do working out. Food for socialist thought there.

I've been doing DDP for a month now, and I haven't seen any results yet, I know Yoga is really about core strength and stability, but if I’m paying actual money, I want glamour muscles, like Sasha Banks! I'm sorry DDP but it’s not for me.

I continue to wonder though, why do so many people sing its praises?

Here's what I suspect; it may be the Scientology of Yoga and everyone who is into it really genuinely believes in the benefit of recruiting more people. OR because you have to subscribe to it, its like the emperors new clothes, no one who's tried it wants to admit that it’s just normal yoga but with a metal soundtrack, and the position names whimsically altered to be wrestling themed, which is cute. I'm a sucker for a gimmick. It’s kind of like going to see Harry Potter and the Cursed Child, but instead of being asked to keep the secrets, you feel too embarrassed to admit this work out is profoundly average.

Listen to the latest episode